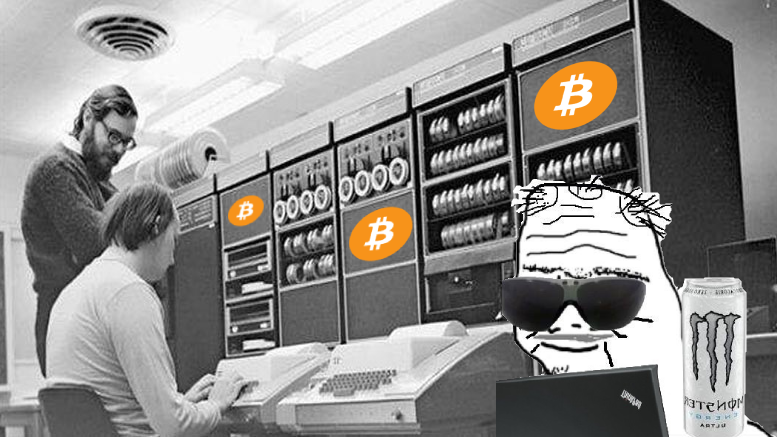 Public key cryptography is integral to the Bitcoin network. Here I explain how we can generate Bitcoin private & public keys, as well as Bitcoin addresses from scratch using the C programming language. I also cover some design choices and features of the Bitcoin protocol implemented by Satoshi Nakamoto.

The predecessor to public key cryptography is symmetric key cryptography, where you and I share a secret password and use it to encrypt and decrypt messages that we send eachother. Think of this like a cipher, where you might replace the letter A with B, and B with C and so on. To decrypt your secret message, I would do the reverse using the same key.

A fundamental flaw of this scheme is that we must share the secret key in order to use it, but as we are yet to establish a safe encrypted means of communication, an attacker may intercept our secret key!

There are a number of different public key protocols, but in all of them you can generate a public key from a private key but never the reverse. These protocols rely on special cryptographic functions that are exclusively one way, ensuring that it is impossible to determine a private key from someone's public key.

In the Bitcoin protocol, an address is where bitcoin is sent to. You can generate an address by taking a hash of your public key. A cryptographic hash function takes any input data and returns a fixed-length string, where it is impossible to calculate the reverse as these functions are one-way. For example, a commonly used hash function is SHA-256:

Notice how just adding a single letter to the input string completely changes the hash. Also see how the hash function outputs a string of fixed length regardless of input length.

In Bitcoin there are now multiple types of addresses (see /wiki/Address). The original "legacy" addresses implemented by Satoshi Nakamoto begin with the number 1: 1K4Y7MF8uXFu7GrwvDcUpwEoNkKcREFnh7. This address type is known as Pay-to-PubkeyHash or P2PKH for short. Legacy addresses are calculated using the following scheme:

It is a complicated scheme! But it includes several very useful features which are detailed below.

The checksum allows anyone to confirm that this public address is a legitimate address. If someone sends us an address, we can verify by performing steps 4 & 5 on the first 21 bytes, and then check that the last 4 bytes of the address are correct. This is most useful when entering a public address by hand where most wallets will prevent you from attempting to send bitcoin to an illegitimate address.

1K4Y7MF8uXFu7GrwvDcUpwEoNkKcREFnh7
Base58 might seem like a weird way to represent addresses at first, but it has some properties that make it advantageous over a decimal 0-9 representation. The first is that using a number system with a high base allows for shorter representation of large integers. For example, the number 1337 in binary would look like 10100111001 in binary (base 2) but looks like Q4 in base 58. As bitcoin addresses are technically just very large integers, this makes sending and reading addresses much simpler.

A computationally inclined person may ask, why not use something more natural like base64? Well base58 uses every number, lowercase letter, and upercase letter except for characters that can easily be mistaken (0, O, I, l). Note $$2\times26 + 10 - 4 = 58$$. Removing these confusing characters makes it much less likely for Bitcoin addresses to be entered incorrectly.

To use this eliptic curve in C, we will be using the bitcoin-core/secp256k1 library, installation is trivial on Linux and MacOS.

In order to use this library, we have to set up a sep256k1_context with

From the documentation of the library: "The purpose of context structures is to cache large precomputed data tables that are expensive to construct...". This allows for addresses to be generated quickly and we will need a context in order to generate our keys.

Generating a Private Key in C

In Unix systems, we can get randomness from /dev/urandom, if you cat /dev/urandom you will see a whole bunch of gibberish.

Using C we can load 32 random bytes by reading from /dev/urandom:

Due to limitations on the secp256k1 curve, not all private keys are valid. There is a $$1/2^{128}$$ chance that the private key is invalid, so we need to check our key is valid by including the following to our main function:

Creating a Public Key in C

Now that we have a 32 byte private key, we can use secp256k1 to calculate the corresponding public key. First, we need to declare a new variable, secp256k1_pubkey, to store our public key:

then we create the public key using a function from the secp256k1 library:

Note that this function takes a pointer for the location of where the public key is to be written.

We now need to serialize this address to translate it into bytes. We use a size_t variable to store the length of the address in bytes:

This function takes a pointer for the length and location of the public key. It serializes the public key into bytes so that we can then manipulate it.

Creating a Bitcoin Address in C

Currently, we have a private key and its corresponding public key in bytes. We wish to follow the scheme outlined earlier to create a bitcoin address. Here we will need to use the C openssl library (-lcrypto) to provide the required SHA256 and RIPEMD160 hashing functions.

At the top of our .c file we require:

To use these hashing functions we need several new variables, a char variable of length 34 to store our address, a byte variable rmd of length 5+RIPEMD160_DIGEST_LENGTH (5+20) to store our final hashes. We will also use a byte type variable s to store some temporary hashes in:

We need to define the type byte at the top of our file with typedef unsigned char byte.

First, let us duplicate our public key into s by looping through each byte. Uncompresse public keys are 65 bytes:

Following the scheme outlined in the steps to create a legacy Bitcoin Address. We be taking the first SHA256 hash of our public key s with SHA256(s, 65, 0) and then take the RIPEMD160 of this hash with RIPEMD160(SHA_HASH, SHA256_DIGEST_LENGTH, md) where md is the location where we are storing the output.

We also need to set a version byte at the start of the address to 0x00:

This completes steps 1-3, now we need to find the checksum.

To create the checksum, we take the SHA256 of this hash twice with:

but we only need the last 4 bytes of the checksum, so we can use memcpy to copy these bytes to the end of the first 21 bytes of rmd:

To use memcpy we need to #include <string.h> at the top of our file.

Now we are very close to a usable bitcoin address, all that is left is to convert these bytes into base58.

We can use this base58 function to convert into base 58. Placing base58() above our main() function:

To store our address we need a char 34 characters long. We can now create our bitcoin address with these final lines in main:

When you compile with gcc file.c -o btcGen -lcrypto -lsecp256k1, and run with ./btcGen hopefully you will be greeted with a Bitcoin address starting with 1:

Great now we have an address that we can send bitcoin to! But how do we spend it? Most software wallets WILL NOT ACCEPT raw byte private keys. Instead, the convention is to use Wallet Import Format; which like in bitcoin addresses, makes the private key easier to copy and transmit.

NEVER STORE LARGE AMOUNTS OF BTC ON SELF GENERATED WALLETS

To convert your private key into WIF:

🧠 I will leave this as an excercise for now, as it is almost identical to the bitcoin address creation scheme. If everything goes right then your WIF private key should begin with a 5. For more details see wiki/Wallet_import_format.

In the Electrum/Electron wallets you can load your WIF like this:

By extending the above code, you can rapidly generate new bitcoin addresses in the hope of randomly reciving a 'nice' address like 1DEADBEEFx24sa... or 100000ae.... To see an example of this see my attempt on Github: niceBit.

A rough summary of the code from this tutorial here /assets/btc_gen.c, which is ready to compile and run.

If you found this useful, please support me in creating these tutorials: