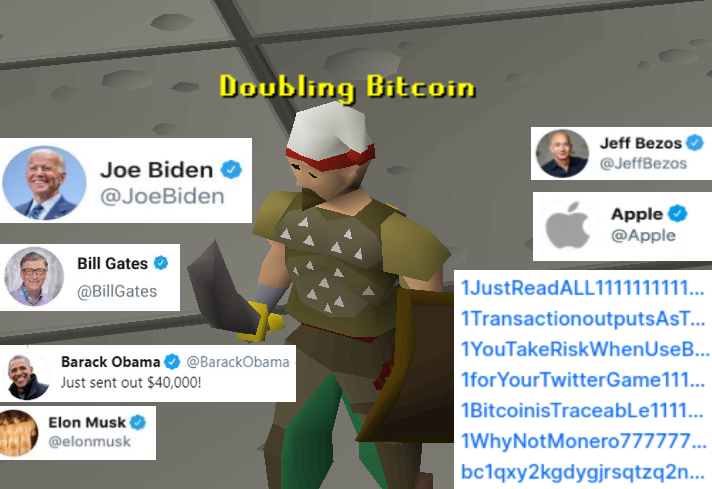 A recent Twitter hack lead to many verified Twitter accounts being hijacked, including Elon Musk, Bill Gates, Barack Obama, and even presidential candidate Joe Biden. The accounts soon started posting 'doubling bitcoin' scams - reminiscent of the age old 'doubling gp' scam in the game Runescape. Send me some money, and I'll send you double back! 🤑 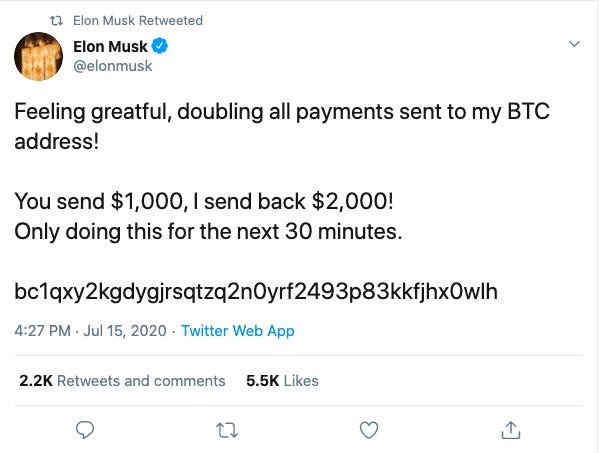 <!---The hacker, who had the ability to impersonate the most powerful people on the planet, only managed to steal ~$120,000 USD. There has been great confusion as to why the hacker with such unrestricted power would go with such a poor scam. Much speculation has arisen, with a few predominant themes: 1. The hacker panicked upon gaining their access. The hacker may have believed they had a small window of time before they lost access to the accounts, and thus went with the easiest scam they could think of. 2. The hacker had no other capital to invest into a more profitable scam. While more elaborate and perhaps riskier, the hacker could have tweeted in such a way to crash stocks or even entire markets given the enormity of their power. For example, Elon Musk's [tweets in the past](https://www.washingtonpost.com/technology/2020/05/01/musk-tesla-stock/) have reduced Tesla's share price by more than 10 percent. * If the hacker was concerned about traceability with stock trades, they could have just opened a highly leveraged anonymous position on bitcoin and posted bullish statements such as "We should look towards moving the United States to a Bitcoin standard dollar". I believe this would have been far more profitable and also less bad publicity for Bitcoin 😏, though it would require some initial capital. 3. This was not the real hack, but possibly a diversion away from something greater. It is currently unconfirmed as to whether the hacker had access to the private messages on the accounts they had accessed. If this data has been stolen, there is great potential for large scale blackmail using the private conversations between verified celebrities, journalists, politicians etc. Currently the cause of the hack is being described as social engineering, where Twitter has stated that at lease one of its employees is involved. --->

A Message to the Hacker

Here we see a message encoded in the 6 customised vanity addresses:

Monero is a privacy coin that uses an obfuscated ledger where it is impossible to determine the source, amount, or destination of transactions. Whereas Bitcoin transactions are fully transparent and hence pseudo-anonymous as long as your addresses are detached from your identity. Information can be gathered about a particular Bitcoin address by following bitcoin transactions in the blockchain.

It appears that someone decided to give the hacker some advice: use Monero for these scams or else you risk getting caught. While it is difficult to ascertain exactly what the messager is saying, it is likely they are suggesting the hacker exchange their stolen bitcoin for monero, so that the transaction trail is lost. It would be a poor choice to replace "doubling bitcoin" scams with "doubling monero" scams, as attempting to scam Monero would dramatically reduce the already tiny 'target audience' for the attack:

The probability of generating a Bitcoin vanity address like 1YouTakeRiskWhenUseBitcoin11cGozM, which contains 25 sequential desired characters, is roughly $$ (1/58)^{25} $$. The 58 comes from Bitcoin's usage of base58, where there are 58 possible characters to choose from (numbers, lowercase & uppercase letters except for 0/O/I/l as these are easily mistaken).

Whose Address is it Anyway?

There is no 'registration' of addresses in Bitcoin, private keys and corresponding addresses can be generated entirely offline. This means that you can send bitcoin to an address that does not necessarily have an owner who has a corresponding private key, provided the address satisfies a few requirements.

The address format used by the message sender was 'legacy' P2PKH implimented by Satoshi Nakamoto. These addresses look like 1NcEUAqEqni2m6sUugSfEi8cSHbUqmi3xZ and involve three main requirements:

For a complete tutorial on how this works, please see https://nickfarrow.com/Cryptography-in-Bitcoin-with-C/.

OK, so it would be impossible to create a vanity address this long legitimately. But can we fake one? Even though we will not have the private key to this address, and the bitcoin recieved will be unspendable, can we forge these addresses in order to send a message?

This could be brute forced, by designing a ~30 character long message and randomly trying a few billion combinations of the last characters would work, but very very slowly.

Forging an Address with C

There is a smarter way to create a crazy address like 1YouTakeRiskWhenUseBitcoin11cGozM. We can forge one. This will involve:

Some steps here will use some C programming, I'll try not to make it too technical. First we will choose our desired message, I'll go with SendNickBitcoin.

Next, we will put this into a format that resembles a bitcoin address,

We will not be able to send bitcoin to this address as it has an invalid checkum.

Next, we can convert this address back from base58 representation into bytes. For convenience I use learnmeabitcoin.com's base58 converter:

From here we can recalculate the correct checksum for the version byte and public point (21 bytes), as in Step 4 of generating an address.

We can do this with some basic C. Here we are defining an unsigned char array with our bytes; setting up:

You can get an easily copy-pastable list of bytes using these two lines of Python:

Now we need to recalculate the checksum, and replace the final 4 bytes of custom_address. Inserting these lines into our main function:

Now copy pasting into the base 58 encoder:

Pretty good! But not perfect. Sometimes the conversion back to base58 'carries over' (think division remainders) and changes the end. Let's try padding slightly differently with 7s instead of 1s like the messenger did with their final address. Our initial address as 1SendNickBitcoin77777777777777777:

And converting to base58:

Much better! Let's check we can send to the address. I'm going to do this on Bitcoin Cash because the transaction fees are cheap for testing.

The proof is in the blockchain, see it for yourself.

This method, or a slight variation of, is how someone encoded a hidden message in bitcoin transactions, to send to the Twitter hacker.

If you found this useful, please consider supporting me in creating these tutorials:

PLEASE do not send bitcoin to any other address in this post, it will be lost, and I will be very angry that you've sent bitcoin to an address I just explained as forged and unspendable.